Klein Curacao is a small, uninhabited, tropical bounty island with a pearly white beach, an azure blue sea, a spectacular reef and beautiful underwater world. This lovely island is located about 25 kilometers from Curaçao and is about 2 square kilometers in circumference. It is a must see when you are on vacation in Curaçao. The beach of this beautiful island is known as one of the most beautiful beaches in the world.

> read more about the island

Klein Curacao is a small, uninhabited, tropical bounty island with a pearly white beach, an azure blue sea, a spectacular reef and beautiful underwater world. This lovely island is located about 25 kilometers from Curaçao and is about 2 square kilometers in circumference. It is a must see when you are on vacation in Curaçao. The beach of this beautiful island is known as one of the most beautiful beaches in the world.

> read more about the island 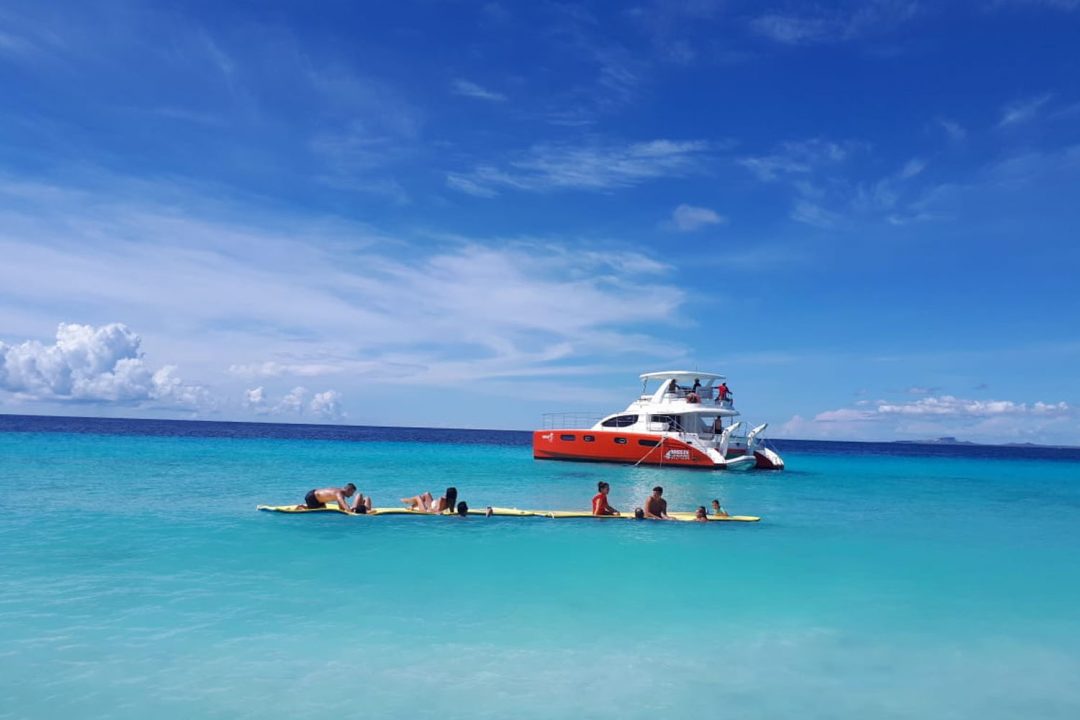 Price per ticket€92
This is the perfect trip if small scale appeals to you. Cozy atmosphere with good food and drinks on board.
(10 Reviews) 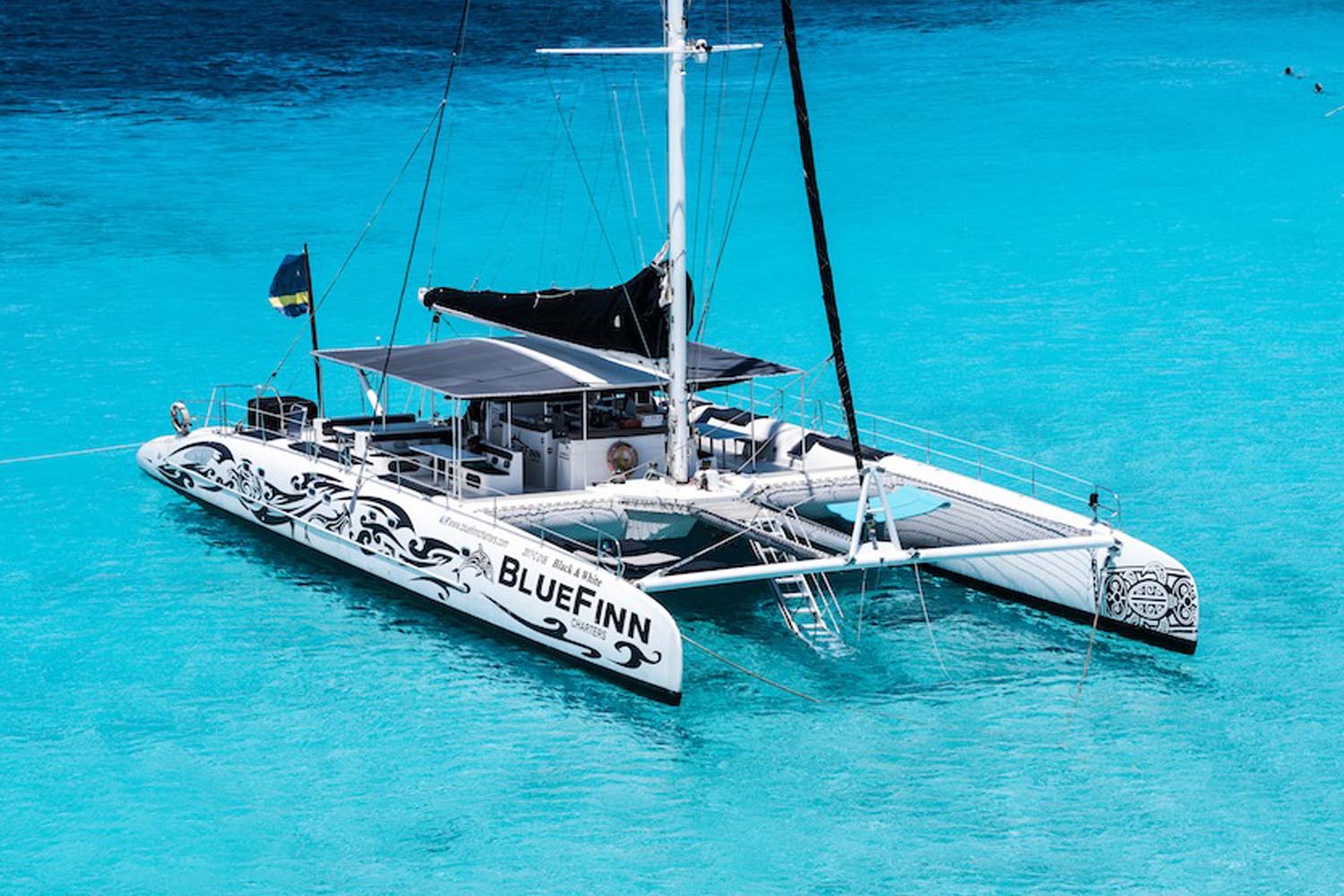 Price per ticket€103
With the largest Black & White catamaran on its way to the pearly white beach and azure blue sea of Klein Curaçao.
(5 Reviews)
With Beach house 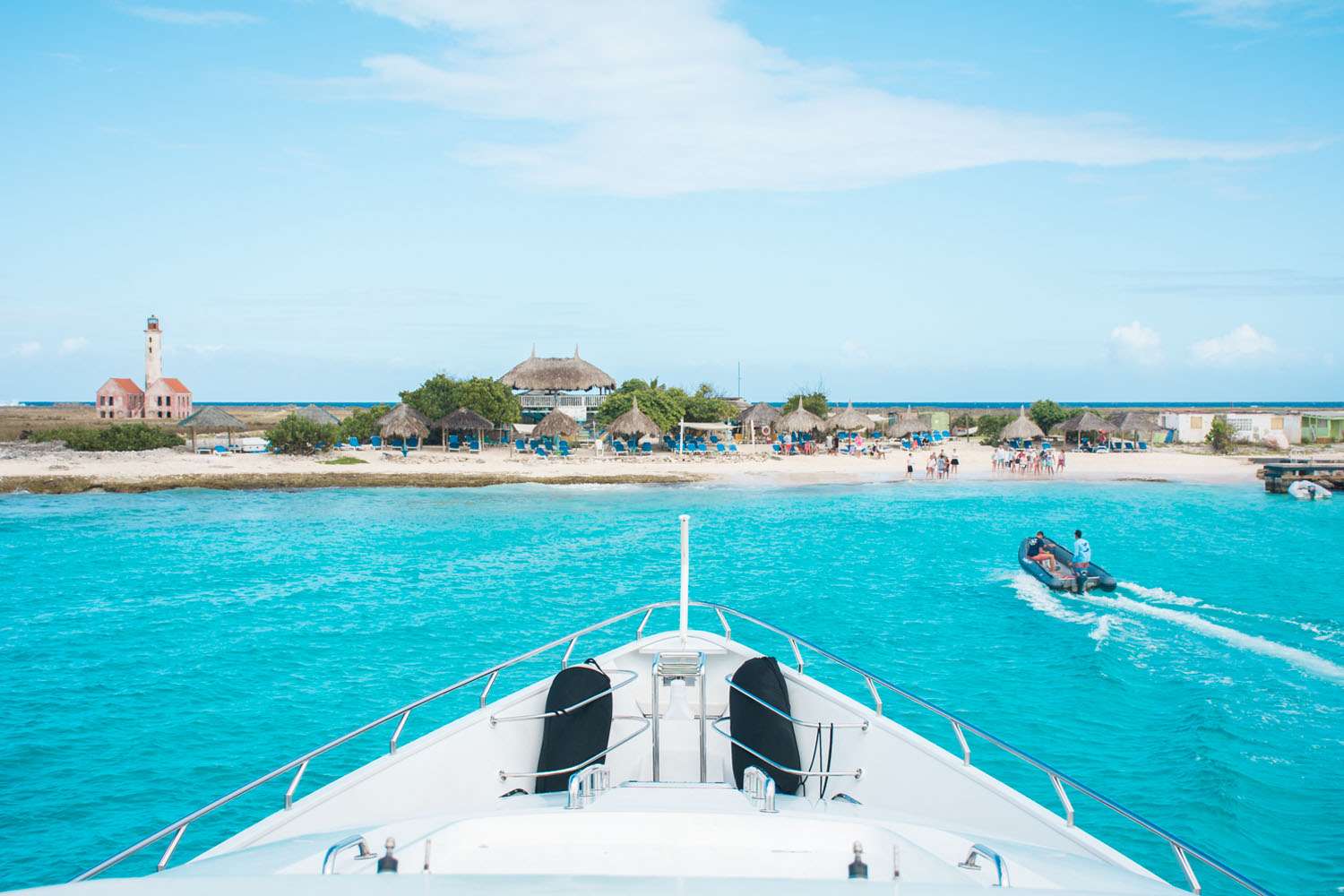 Price per ticket€103
All-inclusive day trip. You sail on a comfortable luxury motor yacht to the tropical Klein Curaçao.
(6 Reviews) 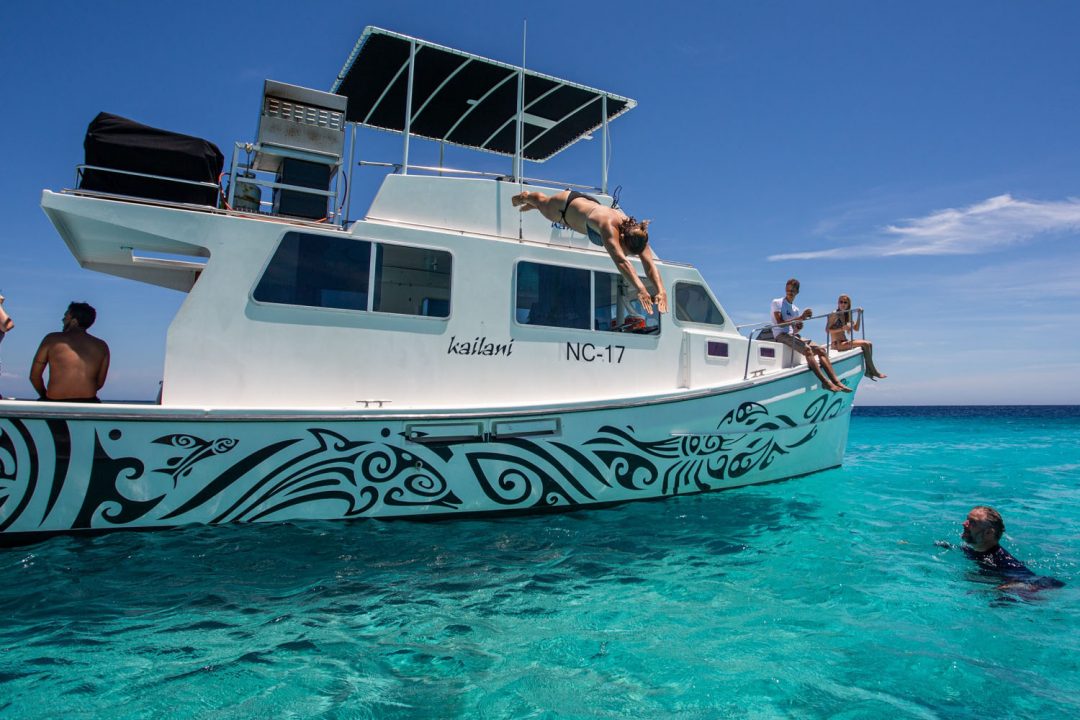 Price per ticket€95
You sail with 'Kailani', a small luxury boat that takes a maximum of 24 people.
(4 Reviews) 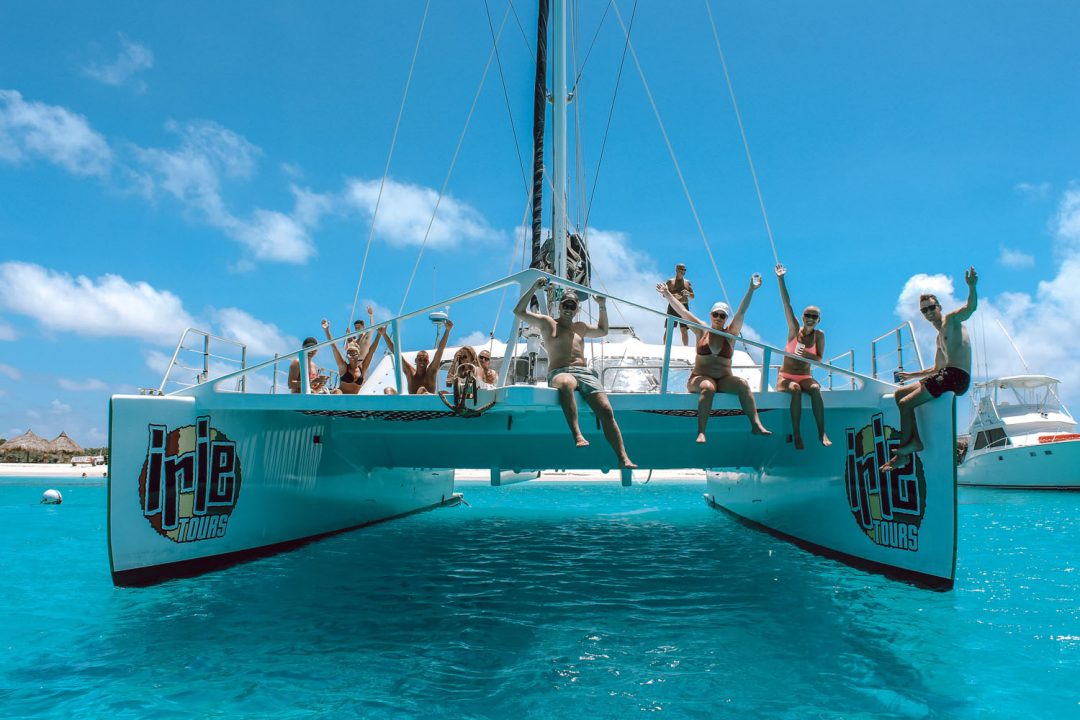 Price per ticket€95
You sail with a beautiful catamaran to the tropical Klein Curacao. Sun, sea, beach and relax!
(6 Reviews)
Sold out quickly 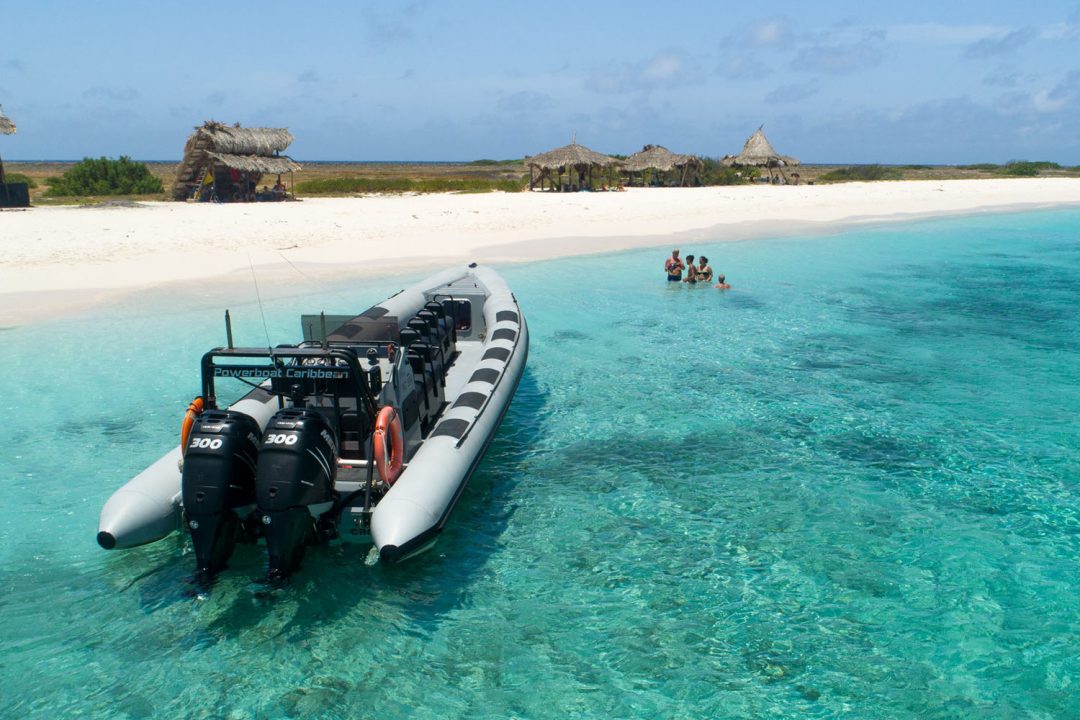 Price per ticket€135
With the Powerboat you will be on Klein Curacao in 45 minutes without getting seasick.
(4 Reviews) 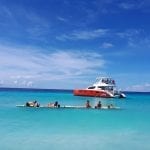 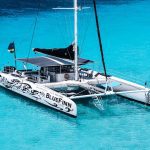 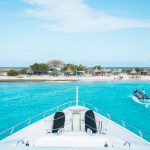 With Beach house
Price per ticket€103 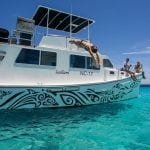 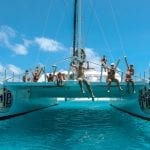 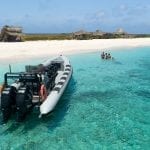 Sold out quickly
Price per ticket€135

The tropical uninhabited bounty island is known for its crystal clear water and snorkeling opportunities. The water is lovely and warm, crystal clear and you have visibility underwater up to 30 meters. The coral reef and fish are fantastic and your first encounter with a sea turtle is on the roll if you are lucky. It's almost magical when they pass you slowly swimming or when you see them calmly swimming to the surface to take a breath. Enjoy, watch, swim with them, make plenty of pictures and videos but never touch them! 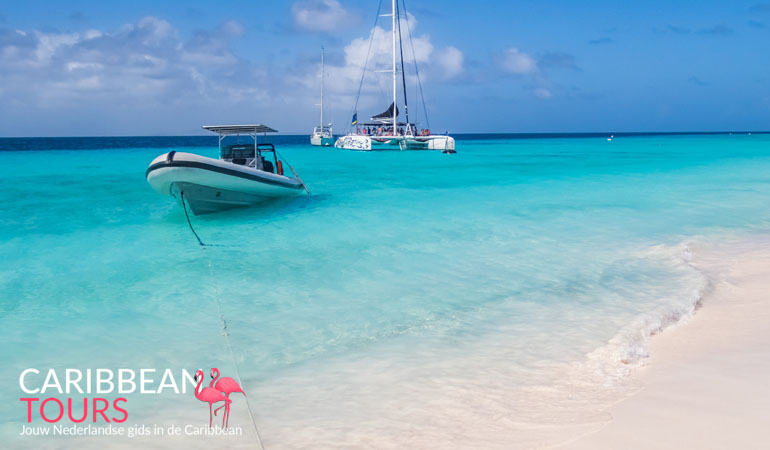 Surface
Uninhabited island of about 2km2

What can you do?
Chill out, hike, swim, scuba dive and snorkel with turtles

It is not exactly known when the island was first discovered. Officially, the island was only put on the map in 1871 by John Godden, an English mining engineer. John Godden discovered that there was a lot of phosphate present on the island, left behind by all the birds that used Klein Curaçao as a breeding ground. Phosphate was at that time a very popular product and was used in Europe as an additive for cattle feed and fertilizer.

In fifteen years time, over ninety tons of phosphate were extracted and exported to Europe. The phosphate extraction changed the landscape of Klein Curacao and created a barren and empty uninhabited island. Thanks to a reforestation project by Carmabi, there is now some green to be discovered here and there.

In the seventeenth and eighteenth centuries the island was used by the West India Company as a quarantine island for slaves. Before the slaves were brought ashore to Curaçao, the sick slaves were placed in quarantine on Klein Curaçao. Those who did not survive were buried on the island.

Klein Curaçao, like Curacao, suffers little from hurricanes. Unfortunately, there have been a few hurricanes in history that have left their marks on the island. The first was the hurricane in 1877. This hurricane destroyed the first lighthouse of the island. It was then decided to build a new lighthouse - the one that still stands today - in the middle of the island.

The island, with its beautiful white beach, is a well-known nesting place for turtles. Every year, sea turtles born on Klein Curaçao return to their birth beach to continue their species. Here you have a real chance of seeing turtles swimming while snorkeling.

Lighthouse
The number one thing to do is take a walk to the iconic pink lighthouse that stands in the middle of the island. The distance from the beach is perfectly walkable and a fun hike. You can enter the lighthouse but be careful. The Curaçao government has started renovating the lighthouse but it is still not 100% safe. The roof, stairs and second floor have been restored.

Because of the northeast wind and enormously strong currents that can occur around the island, the desire arose in the nineteenth century to build a lighthouse on the island. In 1849, the Prins Hendrik lighthouse was built on Klein Curacao. Although hurricanes are rare in this region, the lighthouse was completely destroyed during a hurricane in 1877. Because of its importance to shipping, the lighthouse was immediately rebuilt in 1877. After the Lighthouse was rebuilt again in 1913, the decay has started since then and the monumental ruin has emerged as we know it today. For the safety of shipping, the Klein Curaçao lighthouse was equipped with a LED beacon in 2008, which is powered by solar energy. These led lights blink twice every 15 seconds. In 2017, a start was made with the total renovation of the lighthouse.

Shipwrecks
Klein Curaçao is a flat island making it difficult to see from the bridge of a ship. This combined with the sometimes strong northeast wind and the very strong currents can make it very difficult for a captain to sail the ship past the island. Because of this, it is not surprising that it also went wrong a few times and as a result, the island has a few special sights that makes a walking around the island very enjoyable.

Because of the northeast wind and enormously strong currents that occur around the island, several ships have run ashore. The most famous is the oil tanker that ran aground in the 1980s, called the Maria Bianca Guidesman. The now rusty wreck has its final resting place on Klein Curaçao and is very slowly disappearing through the influence of the elements.

In 1934 another German freighter ran aground, the Magdalena. This gigantic ship was stuck for weeks but the rescue services finally managed to refloat the ship after digging it out by using a lot of manpower and several tugboats.

The most recent shipwreck is a French sailing yacht named 'Tchao' that ran ashore on April 1, 2007. On board the 'Tchao' were four people who were fortunately able to reach shore safely. Unfortunately the ship could not be saved because it had suffered too much damage. Therefore, it was left behind on Klein Curaçao. The shipwrecks are now a sight on the island and lend themselves perfectly as photogenic objects.

First possible dates are shown:
(click on the name of the boat to book the trip)

Caribbean Tours guarantees the lowest price on tours & tickets that can be booked via our website. When you find the same tour or ticket for a lower price within three days of booking or after arrival at destination, we will refund the difference to you.

Conditions for refund
Caribbean Tours' Lowest Price Guarantee is available to every customer who has made a booking on caribbean-tours.co.uk. The Lowest Price Guarantee covers retail prices available to the general public. This does not include discounts you may receive (or may be eligible for) from outside organizations, the tour operator itself, or special offers made as part of a membership program, corporate discount, daily offer, groupdiscount or rewards program. If you find a lower retail price for the exact same tour or ticket, offered on the same date and priced in the same currency as the original purchase on any other website AND notify us within 72 hours of your confirmed reservation on Caribbean Tours, we will refund you the difference. If upon arrival at your destination you find a lower retail price offered by Caribbean Tours' contracted tour operator for the exact same tour or activity, offered on the same day and in the same currency as the original purchase, you will receive from Caribbean Tours the difference. Caribbean Tours reserves the right to verify the details of the lower price where possible. All decisions regarding refunds are made at the sole discretion of Caribbean Tours. Exchange rate differences that may occur due to different currencies will not be refunded.